01 November 2010
By
With contributions from 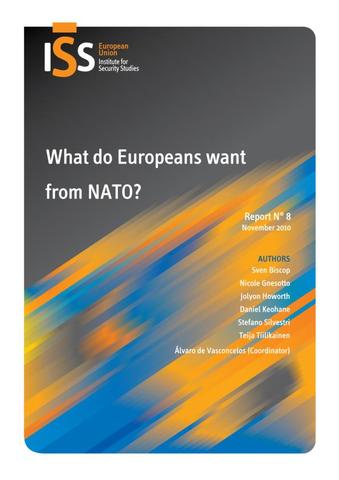 The future of the North Atlantic Alliance is of paramount importance for EU foreign policy. Yet no official EU perspective has been publicly formulated on NATO’s 2010 strategic concept, or how it should complement the EU’s foreign and security policies. This report is a contribution to the debate about NATO’s future, and what that may mean for the EU.

NATO should remain predominantly a regional alliance. NATO should develop a more cooperative relationship with Russia and other neighbours in the Euro-Atlantic area. However, NATO should remain able, in exceptional circumstances, to deploy beyond its perimeter if the vital security interests of a member state(s) are at risk. Afghanistan is the exception, not the rule.

Collective defence must remain the core business of NATO. The crucial corollary of this is that every one of its members should enjoy the same level of security guarantee. Particular attention should be paid to instability along NATO’s Eastern border and beyond the Turkish border.

NATO is a military alliance at the service of a comprehensive strategy. It should not evolve into a fully-fledged crisis management actor with a strong civilian component like the EU or the UN.

EU-NATO cooperation on military capabilities should be improved. In a constrained budgetary environment, neither the EU nor NATO members can afford to waste ever scarcer defence funds. Separately, both organisations are encouraging their members to cooperate on developing capabilities, but they should work much more together.

NATO should eventually become a military component of a stronger EU-US strategic relationship. The EU and the US increasingly work together on security issues as well as non-security issues (which sometimes overlap). A much stronger and more strategic EU-US partnership is likely to develop in the coming decade, due to the combination of the emerging multipolar world and the bedding in of the Lisbon Treaty institutional reforms. In that context, NATO would remain a vital military component of the Euro-Atlantic relationship.