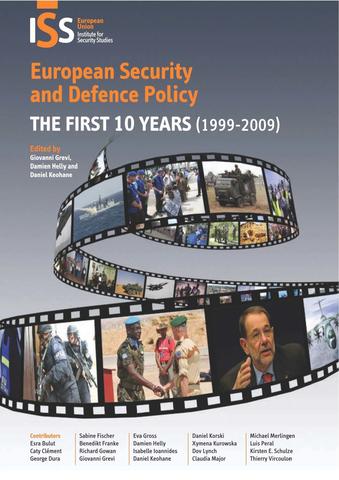 Despite dramatic changes in global security since 1999, in many ways the European Security and Defence Policy (ESDP) has been a success. The EU has helped resolve conflicts and build peace by deploying soldiers, police, judges and diplomats to crisis zones in the Balkans, the Caucasus, the Middle East, Africa and Asia. But the first ten years of ESDP show that it has been hampered by some key weaknesses, such as a lack of resources and intermittent political backing from EU governments.
This EUISS book examines the evolution of ESDP and breaks new ground in three ways: - It includes the first comprehensive review of every ESDP operation to date, some 23 missions in total, assessing their achievements and shortcomings. - It analyses the key relationships between the EU and the United Nations, NATO, the OSCE and the African Union - partnerships which are fundamental in today's changing world.   - It contains data on Member State contributions (both civil and military) to EU operations, and compares the combined military resources of the 27 EU governments in 1999 with 2009.  The book concludes with some recommendations to drive the future of ESDP. These include: firmer political backing for operations from EU governments; more integrated institutions in Brussels for planning and managing operations; increasing military and civil resources; and developing more effective partnerships with others.