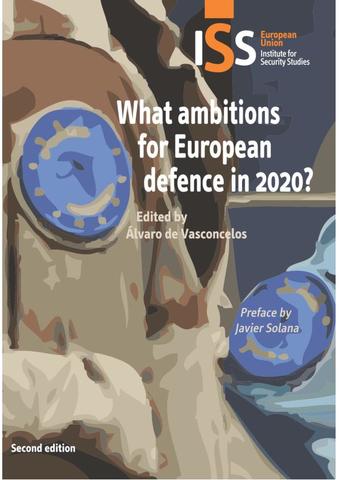 What Ambitions for European Defence in 2020? ran out of print within a month of publication, and many orders for copies were left outstanding. Instead of immediately ordering a reprint, a slightly revised edition giving all contributors the chance to refresh their conclusions in the light of the Irish Lisbon Treaty referendum results was decided as a far better option. This was not particularly difficult. In looking ahead, the general assumption was that the main provisions of the Lisbon Treaty, in content if not necessarily in form, would be implemented over the next decade. What now emerges from the revised chapters is an equally shared sense of urgency that they should be implemented as speedily as possible. Effectiveness should start at home, and although there is a shared sentiment that clarifications are needed for the new provisions to come into effect as the Lisbon Treaty comes into force, there is an equally strong feeling that this should be done swiftly. ‘This book makes a significant contribution to the debate on the future of ESDP and the implications of what the Lisbon Treaty could and should bring to it, identifying the obstacles to progress and solutions for addressing them. I am grateful to the EUISS for this important initiative and to the contributors for their valuable input.’
Javier Solana (Preface) ‘...many of the questions raised in this timely volume, and many of its conclusions, will shape the debate within Europe and across the Atlantic for years to come. No one concerned with Europe’s future as a world power, whether policymaker or scholar, can afford to miss it.’
Simon Serfaty, Brzezinski Chair, Center for Strategic & International Studies ‘...since 2002 the European Union has had its own foreign policy think-tank, the European Union Institute for Security Studies, and its publications are often worth a look. On July 28th, the EUISS launched a hefty book carrying predictions about what EU security and defence policy might look like in 2020.’
The Economist, Charlemagne ‘A new publication from the Paris-based European Union Institute for Security Studies (EUISS) to mark the tenth anniversary of the European Security and Defence Policy says that the EU needs ‘‘to build a twin robust civilian and military capacity’’ over the next decade. The EU, through projecting its values of liberalism, human rights and democracy, can be a major force for good in the world, the report’s authors argue...’
The Sunday Business Post