Migration to Europe: the numbers game 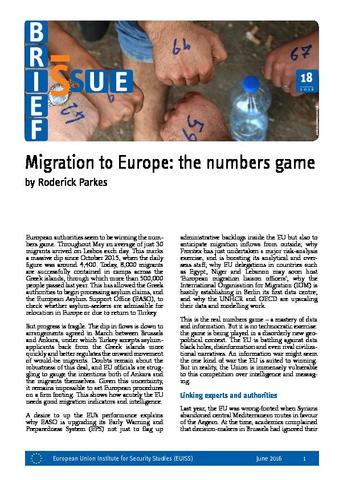 European authorities seem to be winning the numbers game. Throughout May an average of just 30 migrants arrived on Lesbos each day. This marks a massive dip since October 2015, when the daily figure was around 4,400. Today, 8,000 migrants are successfully contained in camps across the Greek islands, through which more than 500,000 people passed last year. This has allowed the Greek authorities to begin processing asylum claims, and the European Asylum Support Office (EASO), to check whether asylum-seekers are admissible for relocation in Europe or due to return to Turkey. But progress is fragile. The dip in flows is down to arrangements agreed in March between Brussels and Ankara, under which Turkey accepts asylum-applicants back from the Greek islands more quickly and better regulates the onward movement of would-be migrants. Doubts remain about the robustness of this deal, and EU officials are struggling to gauge the intentions both of Ankara and the migrants themselves. Given this uncertainty, it remains impossible to set European procedures on a firm footing. This shows how acutely the EU needs good migration indicators and intelligence.