European security integration in the 1990s 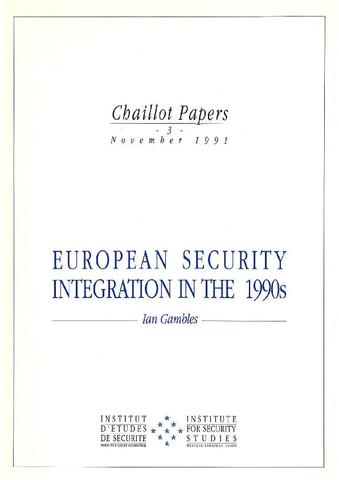 As the third of its Chaillot Papers the Institute is pleased to publish this essay by Dr Ian Gambles on European security integration in the 1990s. In a period in which we are having to examine radical restructuring of security in Europe following the historic changes of the last two years, Dr Gambles' paper provides an important reflection on some of the conceptual underpinnings for security analysis in Europe. We invited Dr Gambles to begin work on this paper earlier this year and inevitably the changes which occurred in the Soviet Union this August have led to certain revisions being made. The paper, however, presents an analysis which will be useful for the continuing debate on the arrangements which we require. One of the most important achievements of developments in Western Europe in the postwar period has been the establishment of a `security community', as outlined by Dr Gambles. This has made war between West European states unthinkable, and it is indeed the challenge of the immediate future for such security arrangements to be extended to the remaining parts of Europe. This could then serve as a model for the world as a whole.

The special Franco-German security relationship in the 1990s