The special Franco-German security relationship in the 1990s 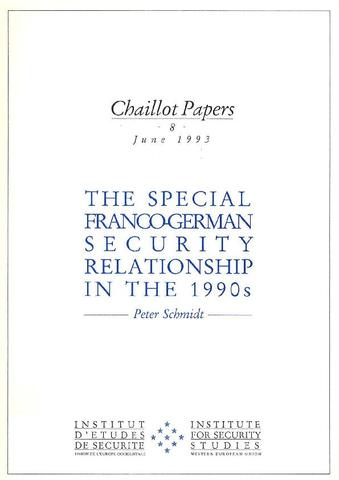 The Institute was pleased to welcome Peter Schmidt, one of the leading German scholars of European security integration from the Stiftung Wissenschaft und Politik, Ebenhausen, as a visitor during the early part of 1992. This paper, which was begun while he was with us and completed subsequently, formed the basis for a number of discussions within the Institute and we are now glad to be able to make it available to a wider audience.<br /><br />The Franco-German relationship has been one of the driving factors in the process of European integration, and Peter Schmidt's perceptive analysis indicates the way that the relationship has operated during the last three years and how it can continue to contribute to security integration in the post-Cold War period. In a very balanced evaluation, he does not hesitate to indicate the potential problems but places these within the wider context of European developments.