Whatever happened to Yemen’s army? 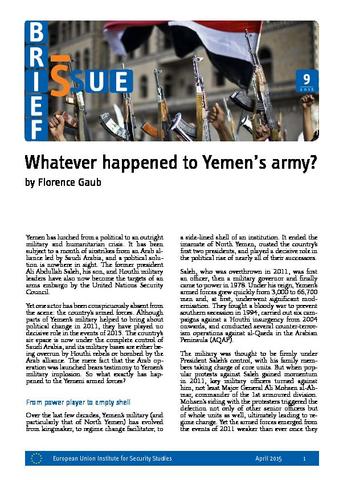 Yemen has lurched from a political to an outright military and humanitarian crisis. It has been subject to a month of airstrikes from an Arab alliance led by Saudi Arabia, and a political solution is nowhere in sight. The former president Ali Abdullah Saleh, his son, and Houthi military leaders have also now become the targets of an arms embargo by the United Nations Security Council.
Yet one actor has been conspicuously absent from the scene: the country’s armed forces. Although parts of Yemen’s military helped to bring about political change in 2011, they have played no decisive role in the events of 2015. The country’s air space is now under the complete control of Saudi Arabia, and its military bases are either being overrun by Houthi rebels or bombed by the Arab alliance. The mere fact that the Arab operation was launched bears testimony to Yemen’s military implosion. So what exactly has happened to the Yemeni armed forces?