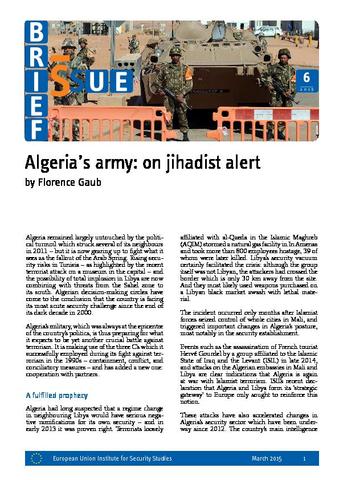 Algeria remained largely untouched by the political turmoil which struck several of its neighbours in 2011 – but it is now gearing up to fight what it sees as the fallout of the Arab Spring. Rising security risks in Tunisia – as highlighted by the recent terrorist attack on a museum in the capital – and the possibility of total implosion in Libya are now combining with threats from the Sahel zone to its south. Algerian decision-making circles have come to the conclusion that the country is facing its most acute security challenge since the end of its dark decade in 2000. The Algerian military, which was always at the epicentre of the country’s politics, is thus preparing for what it expects to be yet another crucial battle against terrorism. It is making use of the three C’s which it successfully employed during its fight against terrorism in the 1990s – containment, conflict, and conciliatory measures – and has added a new one: cooperation with partners.