What next for South Sudan? 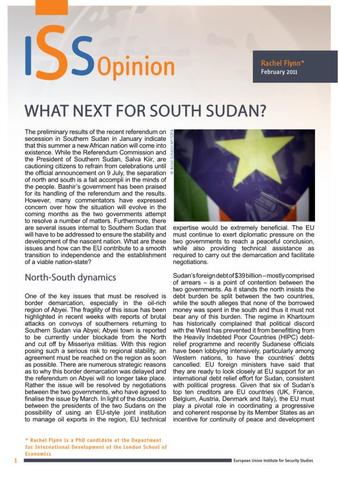 The ‘two Sudans’ are beset with narratives of conflict: between Arab Africans and Black Africans; between Islam and Christianity; between those who fought the civil war and those who fled to neighbouring countries. The binaries are endless and whether their content is real or imagined, they remain powerful portrayals of the region as a battleground of opposing interests and causes. There are many challenges both in the short and long-term, but this is a historic moment for Sudan and for the whole African continent.

The achievements to date should not be forgotten. The multitude of reports predicting widespread violence during the referendum and conflict in its aftermath have thus far not proved correct and with adequate support, both diplomatic and financial, it is possible that the south could secede peacefully from the north and embark on its nation-building project. Nonetheless, numerous challenges remain and sustained diplomatic attention from the international community is imperative and Sudan must remain high on the political agenda in Brussels in the coming months.

How could the Arab democratic wave change Africa?

The future of Sudan: challenges ahead