27 November 2009
By
With contributions from 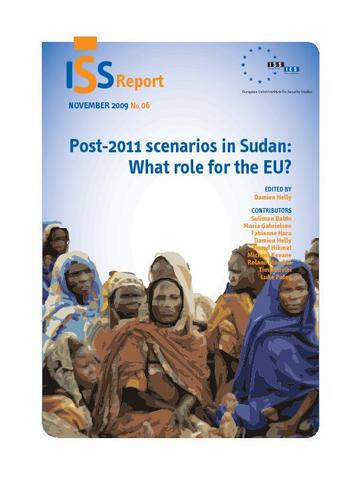 Executive Summary: In a forward-looking perspective, this report elaborates on four scenarios for Sudan’s future preliminarily identified by other studies: (i) forced unity; (ii) forced secession; (iii) agreed unity; (iv) agreed secession. It looks specifically at the key variables to be taken into account to anticipate the most probable scenarios and to see which options would bring more benefits than costs to the Sudanese people and their leadership. The report presents the views of a group of Sudan experts which, overall, are strikingly convergent and are summarised below. It also identifies long-term, mid-term and short-term recommendations for the EU and for all stakeholders concerned by Sudan’s future. The separation of Southern Sudan from the North of the country in 2011 or even before is very likely – a transition that will probably not take place without violence. It must therefore be anticipated by an ambitious regional and international peacemaking initiative in which the EU should play a proactive role. Immediate challenges, if not addressed, may otherwise have serious repercussions in Africa and the Middle East, two strategic neighbouring regions for Europe. First, domestic Sudanese peacebuilding dynamics are reaching their limits despite US mediation efforts. This is even more the case due to the fact that resistance from the Al Bashir and NCP-led regime to external pressure constrains the effectiveness of African regional organisations like the African Union (AU) or Intergovernmental Authority on Development (IGAD) in exerting transformative policy influence over Khartoum. Immediate steps must therefore be taken to (a) convince the National Congress Party (NCP) and Sudan People’s Liberation Movement (SPLM) to agree on appropriate benchmarks and measures to ensure free and fair upcoming elections on a national level and a self-determination referendum in the South while not compromising the chances of the Darfur peace process bearing fruit. Second, it is to be assumed that Southern Sudan is going to secede from the North after the 2011 referendum or even before and this requires planning from the parties as much as from the international community. Because the partition of Sudan will have consequences for regional and international security, more proactiveness from global players is needed to gather different ongoing dialogue promotion initiatives regarding post-2011 issues under a single multilateral umbrella. Third, the EU has a complementary political role to play with the US to engage global, Arab and African powers and organisations in this process and provide its own expertise. The EU needs to pragmatically endorse the assumption of Southern secession and adopt a ‘peaceful coexistence strategy’ using all existing European instruments in a more coordinated manner. To attain this objective, EU Member States need to mainstream their policies by maximising the role played by national envoys and create a single EU framework within which they can work. The EU could then advocate for a strong internationally backed-up dialogue promotion policy. Finally, in the long term, and despite Sudan’s good macroeconomic performance, prevention and mitigation of violent conflicts in the country will remain necessary for decades to come. Key recommendations to the EU: In the next few months: • Optimise the synergy of national European and EU envoys by gathering them in one strengthened EU team including national diplomats, European Commission staff and the current EUSR team. • Convene, together with the E6 (the US, China, Russia, France, the UK and the EU) a conference at the highest possible level, to agree on an all-Sudan strategy following a road map comprising several steps: (a) joint assessment of diplomatic levers that could be used to convince the parties to organise elections in late 2010 once, as hopefully will turn out to be the case, the Darfur peace process has yielded results; (b) defining benchmarks for fair elections in 2010 and other consultations in 2011, recognising the importance of fair participation and stability in Darfur and of the 2011 self-determination referendum in the South; (c) planning the internationally coordinated management of a transition period between unity and full separation to defuse tensions and reshape the international presence in Sudan; (d) establishing a negotiation framework for post-secession issues, with a work plan and timetable to address the issues of sovereignty transfers, wealth transfers and sharing; adequate formats, clusters and division of labour for the international players; negotiation methodologies and agendas. • Appoint as a matter of urgency a team of experts supporting the EU Special Representative and the European Commission. They should cooperate as closely as possible with the AU to start work on concrete proposals regarding an internationally supported negotiation framework and programme on post-2011 issues and in particular on (a) the division and transfer of state assets and (b) external incentives for the parties to engage in negotiations. • Fund and monitor the 2010 elections, self-determination referenda and popular consultations in the South and transitional areas, provided the minimum benchmarks mentioned above are maintained. In the next 24 months: • Engage non-E6 powers and organisations (the AU, IGAD, LAS, India, Malaysia, South Korea) to be more active partners in supporting the whole spectrum of post-2011 arrangements. • Lead the donor community to support South Sudan institutional capacities and governance in all vital sectors (health, food, security governance and state building) as well as in the Nuba Mountains, Abyei and the Blue Nile. In the next two to ten years: • Consider contributing to an ‘insurance against shocks’ fund for Sudan to prevent civil war and conflict outbreaks linked to weather shocks. • Consider technical assistance on large-scale urban planning where appropriate. • Continue to work with both the Government of Sudan and the Government of South Sudan to develop their technical oil expertise and support initiatives to improve transparency and accountability by engaging oil companies involved in Sudan (i.e. from China, Malaysia and India) as well as Sudan’s main oil consumers (Japan). • Support, following existing best practice in Sahel, Sudanese communities and authorities more systematically and over the long term in promoting livestock sectors and mitigating conflict over grazing lands through inclusive and legitimate processes.