How could the Arab democratic wave change Africa? 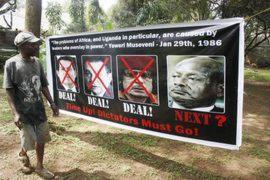 It has been almost a year now since the Arab democratic wave began, and several countries in the region have reached a decisive point of transition. The outcomes of the revolutions in Tunisia, Egypt and Libya remain unpredictable, but there is a strong sense that their repercussions reach far beyond North Africa. But what impact on the wider African continent have we really been able to see so far?

In one regard, the answer is quite clear: a spill-over of upheavals from the north to sub-Saharan Africa (SSA) has not taken place and seems unlikely any time soon. We have seen some political activism inspired by events in Tunisia and Egypt, such as the ‘walk to work’ protests in Uganda and demonstrations in Djibouti, Senegal, Mozambique and Angola, among  other places. But contrary to the central arenas of the Arab uprisings, these kinds of protests have been rather limited and fairly short-lived, though they were instigated in a similar way by rising food prices and political manoeuvres of the ruling elites.

Common explanations for the absence of major uprisings range from lower human development and the lack of a well-organised middle class in SSA, to the absence of political Islam as it exists in North Africa and limited access to the internet. But as several critics have stressed, such factors fail to take into account that many sub-Saharan countries have already undergone democratisation of some sort over the last two decades; this included the emergence of multi-party systems in the 1990s and the rise of various types of civil society organisations. This rather gradual process did often lead to hybrid regimes rather than to full-fledged democracy. Yet autocracy has clearly been on the decline. For example, all of the countries in sub-Saharan Africa, with the exception of Eritrea and Somalia, have been holding general elections since 2005. More importantly, a clear majority of SSA countries have displayed higher levels of political freedom and civil liberties than in Tunisia, Egypt and Libya before the Arab uprisings, according to the Freedom House Index. It might exactly be this less autocratic environment that has kept dissent rather low in SSA recently. However, if this connection really exists, we should expect to see more repercussions in countries like Sudan where the political sphere is still tightly controlled.

Even in the absence of wide-spread upheavals, there is a feeling that the Arab revolutions have influenced African politics in important ways. A report by a Working Group of the Africa Center for Strategic Studies (ACSS) concluded that the collective consciousness of African citizens and their expectations of their own governments have changed due to events in North Africa. Indeed, there was much support for the movements in Egypt and Tunisia. African activists also frequently refer to the Arab democratic wave as a role model for popular dissent, for example in the context of the upcoming elections in the Democratic Republic of Congo.

But changes in attitude and rhetoric do not necessarily translate into action. In fact, we know very little about the possible ‘demonstration effect’ of events in North Africa for countries further south. They might have increased the likelihood for change, but as all the revolutions in the Arab world have been accompanied by violence and social tensions, people might just as well become more hesitant to aim for a rather sudden, fundamental upheaval.

It is equally unclear what lessons (semi-) authoritarian regimes in Africa have learned from the ousting of long-term leaders in North Africa. The difficulties and costs of sustaining a closed, repressive system may ostensibly have increased. But the Arab uprisings do not merely send a single message in favour of reforms and democratisation. Some regimes, such as Syria, Yemen and Bahrain, have so far managed to survive by using their violent tactics. Furthermore, military interventions of the kind we saw in Libya are much more unlikely in most parts of sub-Saharan Africa, and a lasting change and impact of donor policies is still incalculable, particularly with the important role of China on the continent. There is also the anticipation that foreign aid for sub-Saharan Africa may reduce due to an increased focus of donors on North Africa and the Middle East.

Overall, African regimes may opt for reforms just in time to prevent popular dissent from rising, but some might just as well be tempted to impose even tougher restrictions on the opposition, civil society and the media. The almost paranoid reaction by the Zimbabwean regime with the arrest and charge of six activists watching videos of Egyptian and Tunisian uprisings can serve as an example in this regard.

Naturally, the Arab democratic wave also has potential implications for sub-Saharan Africa beyond the issue of regime change. The new EU Strategy for Security and Development in the Sahel highlights the close relations of countries in the Maghreb and Sahel (particularly Mauritania, Mali and Niger), the presence of larger groups of Sahel migrants in the Maghreb and the risk of arms proliferation in the region. The situation in the Sahel with sanctuaries and operations of the Al-Qaida branch in the Maghreb (AQIM) and several local trouble spots has already become more unstable and will likely be further complicated, particularly by events in Libya.

In the field of security, the violent revolution in Libya has been an overriding concern. Gaddafi’s self-imposed role as the leader of the continent, his patronising links to several African regimes and the intense fight to remove him from power evoke potential dangers in the neighbouring region. Chad serves as an important example as a recent International Crisis Group report pointed out. The country’s regime has received economic and political support from Tripoli in the past and Chadian fighters were allegedly among the pro-Gaddafi forces. This has not only led to uneasy relations between the new Libyan leadership and president Déby’s regime – and a loss of important financial investment for Chad – but also to a dangerous circulation of weapons and fighters with potential impacts for Sudan, mainly Darfur. Furthermore, Chadian migrants in Libya are at risk of being misidentified as pro-Gaddafi forces and subsequently persecuted, even though they are mostly there for economic reasons.

Migration has become a major point in the debate on the implications of the North African revolutions for Africa. There have not only been refugee flows from Arab spring countries to neighbouring states; Chad alone will be struggling with a backflow of about 500,000 migrants as African Union Chairperson Jean Ping recently pointed out.

The African Union (AU) itself and the continent’s security architecture will almost certainly change as well. Gaddafi was a key initiator of the successor of the Organisation of African Unity and was one of its biggest funders. Moreover, the AU has been essentially sidelined and struck by political disunity in reacting to the Libyan crisis. Apart from Gaddafi’s support for certain African presidents when they were still rebel leaders and his important investments across sub-Saharan Africa, a general suspicion against the NATO intervention and anger over the disregard of the AU road map for Libya has led to hesitant recognition of the National Transitional Council It remains to be seen whether the organisation will regain some leverage in Libya, but more interesting is the future development of alliances and interaction on the continent. As some analysts have pointed out, some sub-Saharan countries might just as well be glad about the end of Gaddafi’s patronising interference. But so far, the new geostrategic picture of Africa is unclear.

While the Arab uprisings certainly have been a game-changer for Africa’s wider political and security structure, much more systematic research needs to be done to identify clear implications on a case-by-case basis and at a micro level. In some regards, much will also depend on time as the outcome of the North African revolutions in the coming months and years will certainly resonate further south.

Even without war, much to worry about in post-election Congo