Unrest in Ethiopia: plus ça change? 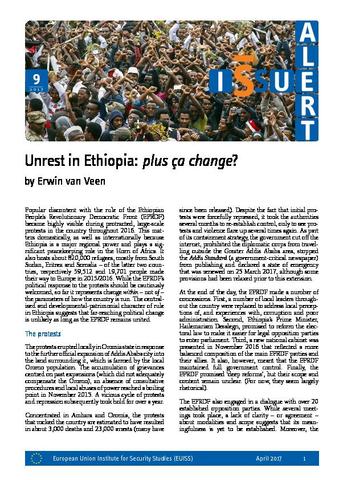 Popular discontent with the rule of the Ethiopian People’s Revolutionary Democratic Front (EPRDF) became highly visible during protracted, large-scale protests in the country throughout 2016. This matters domestically, as well as internationally because Ethiopia is a major regional power and plays a significant peacekeeping role in the Horn of Africa. It also hosts about 820,000 refugees, mostly from South Sudan, Eritrea and Somalia – of the latter two countries, respectively 59,512 and 19,701 people made their way to Europe in 2015/2016.

While the EPRDF’s political response to the protests should be cautiously welcomed, so far it represents change within – not of – the parameters of how the country is run. The centralised and developmental-patrimonial character of rule in Ethiopia suggests that far-reaching political change is unlikely as long as the EPRDF remains united.