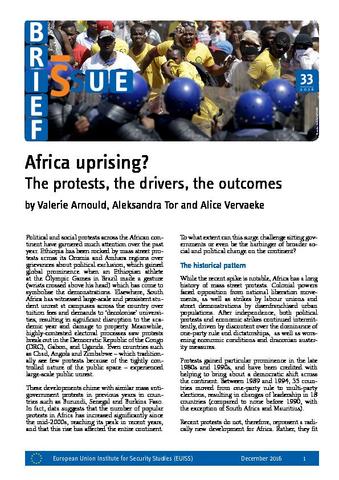 Political and social protests across the African continent have garnered much attention over the past year. Ethiopia has been rocked by mass street protests across its Oromia and Amhara regions over grievances about political exclusion, which gained global prominence when an Ethiopian athlete at the Olympic Games in Brazil made a gesture (wrists crossed above his head) which has come to symbolise the demonstrations. Elsewhere, South Africa has witnessed large-scale and persistent student unrest at campuses across the country over tuition fees and demands to ‘decolonise’ universities, resulting in significant disruption to the academic year and damage to property. Meanwhile, highly-contested electoral processes saw protests break out in the Democratic Republic of the Congo (DRC), Gabon, and Uganda. Even countries such as Chad, Angola and Zimbabwe – which traditionally see few protests because of the tightly controlled nature of the public space – experienced large-scale public unrest.