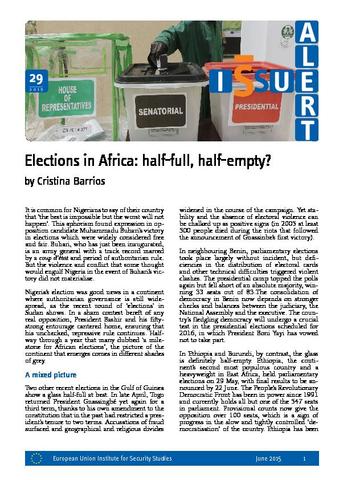 It is common for Nigerians to say of their country that ‘the best is impossible but the worst will not happen’. This aphorism found expression in opposition candidate Muhammadu Buhari’s victory in elections which were widely considered free and fair. Buhari, who has just been inaugurated, is an army general with a track record marred by a coup d’état and period of authoritarian rule. But the violence and conflict that some thought would engulf Nigeria in the event of Buhari’s victory did not materialise. Nigeria’s election was good news in a continent where authoritarian governance is still widespread, as the recent round of ‘elections’ in Sudan shows. In a sham contest bereft of any real opposition, President Bashir and his fifty-strong entourage cantered home, ensuring that his unchecked, repressive rule continues. Half-way through a year that many dubbed ‘a milestone for African elections’, the picture of the continent that emerges comes in different shades of grey.

Congolese lessons for the Great Lakes