The United States and European defence 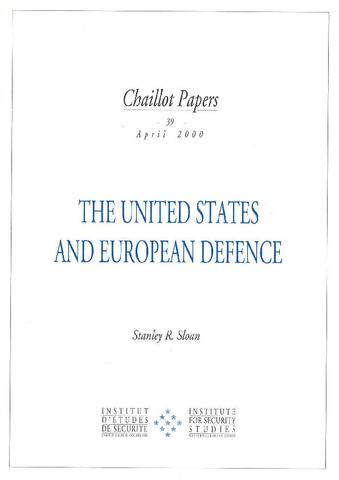 The more headway the Europeans make in the setting up of a true European Union defence capability, the more voices are heard in the United States that analyse, question, challenge or fear this new European ambition. Nothing, moreover, could be more natural, given that, in their serious intent, their scope and their unanimity, the decisions taken at Cologne and Helsinki signal a clear departure from the EU’s long tradition of politico-strategic non-existence. In order to allow an understanding of the full gamut of the detail and logic, but also the contradictions, of these American perceptions, it seemed to us both useful and urgent to invite, for the first time, an American author to contribute to the Chaillot Paper series. And not just any author: Stanley Sloan, by virtue of the various posts he has held in the US administration, but above all because of his acute knowledge of the Congress, is without any doubt one of the most well-informed observers of the strategic community in the United States. Ranging from the Bush administration to that of President Clinton, from Congress to the major US think tanks, from the military to the most influential columnists, in these pages Stanley Sloan examines and dissects all the current arguments, expectations and anxieties surrounding European defence.