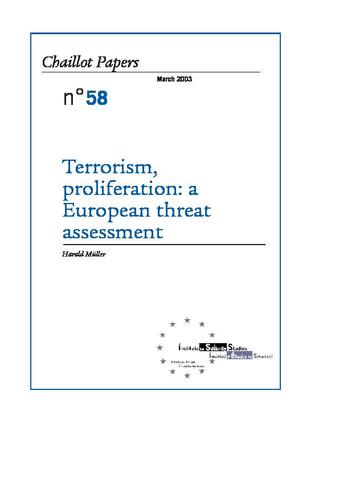 Security thinking has undergone a significant evolution since the end of the Cold War. The scope of the subject has been extended from the nation-state to societal groups and individuals, and areas covered now include health, the environment, protection against crime and economic disruption, and culture. Yet this broadening of the term’s meaning could rob it of its significance. Since 11 September, the security debate has been refocused. A brand of terrorism inspired by a militant political theology that sets no limits on the violence it employs, the spread of weapons of mass destruction (WMD) and their means of delivery to extremist governments, and the combination of both, have become the main security concerns within the Western world that influence the preventive, defensive, and responsive instruments with which states and societies try to preserve their security. The countries of the European Union are affected by both security threats. The al-Qaeda network is present in Europe and, according to its own pronouncements and practices, is targeting European countries. It is essential to understand as well as possible, the ideology, strategy, and structure of this new type of organisation in order to adopt the best countermeasures available; for this organisation is by no means invulnerable. Broad cooperation among European countries is essential for an effective anti-terrorist policy. In the fight against terrorism, it is essential to bear in mind that democracy must be protected and preserved, and basic civil rights not encroached upon. The proliferation of WMD is confined to a relatively small number of countries. Given the means of delivery available to them now and in the foreseeable future, they do not at present constitute an acute security risk for the countries of the European Union. In the long run, as technologies become more sophisticated and the range and accuracy of missiles are extended, the danger might grow. Europeans would be well advised to develop a broad spectrum of policies to deal with this risk, ranging from military preparations to a strengthening of non-proliferation regimes and a diplomatic approach to those proliferators whose WMD programmes signal acute security concerns rather than simply aggressive intent. The terrorism/proliferation axis has become a very sensitive subject for the transatlantic partners, even though one might expect that their common interest in combating the risk would lead to a convergence of policies. The sharp unilateralist turn in recent US policies on arms control and non/counter-proliferation have divided the member states of the European Union. Strangely, an additional security risk emerges here to the European Union – not to the physical integrity of its member states but to the coherence of its institutions, and thereby to greater European integration.