A solidarity package for the eastern partners 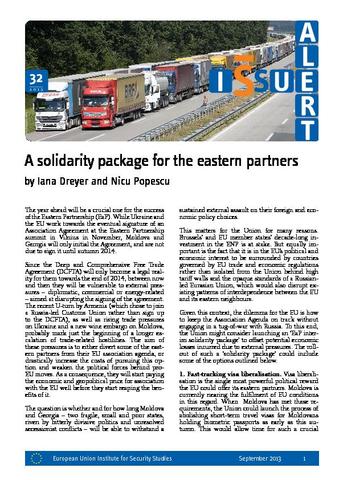 The year ahead will be a crucial one for the success of the Eastern Partnership (EaP), And not only because the Vilnius summit, due to take place on 28-29 November, will mark the first decade of the European Neighbourhood Policy launched in 2003. While Ukraine and the EU work towards the eventual signature of an Association Agreement, for Moldova and Georgia the EaP summit will represent a true milestone as both countries are roughly one year away from reaching the finishing line and signing the agreement. But since the Deep and Comprehensive Free Trade Agreement (DCFTA) will only become a legal reality for Them towards the end of 2014, between now and then they will be vulnerable to external pressures – diplomatic, commercial or energy-related – aimed at disrupting the signing of the agreement.Thus, over the next twelve months, Moldova and Georgia are likely to incur significant costs resulting from their persistence in the rapprochement with the EU. As a consequence, they will start paying the economic and geopolitical price for association with the EU well before they start reaping the benefits of it.