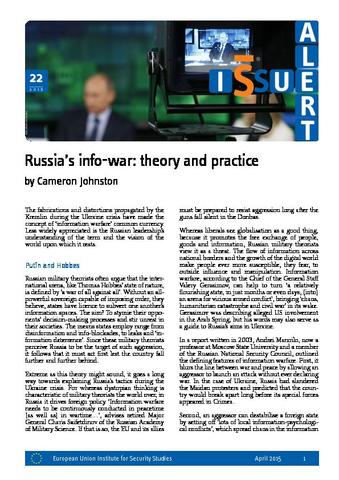 The fabrications and distortions propagated by the Kremlin during the Ukraine crisis have made the concept of ‘information warfare’ common currency. Less widely appreciated is the Russian leadership’s understanding of the term and the vision of the world upon which it rests. Russian military theorists often argue that the international arena, like Thomas Hobbes’ state of nature, is defined by ‘a war of all against all’. Without an all-powerful sovereign capable of imposing order, they believe, states have licence to subvert one another’s information spaces. The aim? To stymie their opponents’ decision-making processes and stir unrest in their societies. The means states employ range from disinformation and info-blockades, to leaks and ‘information deterrence’. Since these military theorists perceive Russia to be the target of such aggression, it follows that it must act first lest the country fall further and further behind.