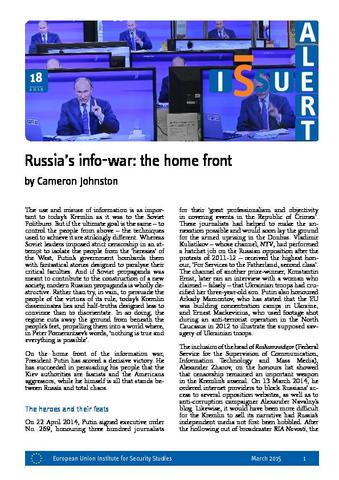 The use and misuse of information is as important to today’s Kremlin as it was to the Soviet Politburo. But if the ultimate goal is the same – to control the people from above – the techniques used to achieve it are strikingly different. Whereas Soviet leaders imposed strict censorship in an attempt to isolate the people from the ‘heresies’ of the West, Putin’s government bombards them with fantastical stories designed to paralyse their critical faculties.

And if Soviet propaganda was meant to contribute to the construction of a new society, modern Russian propaganda is wholly destructive. Rather than try, in vain, to persuade the people of the virtues of its rule, today’s Kremlin disseminates lies and half-truths designed less to convince than to disorientate. In so doing, the regime cuts away the ground from beneath the people’s feet, propelling them into a world where, in Peter Pomerantsev’s words, ‘nothing is true and everything is possible’.