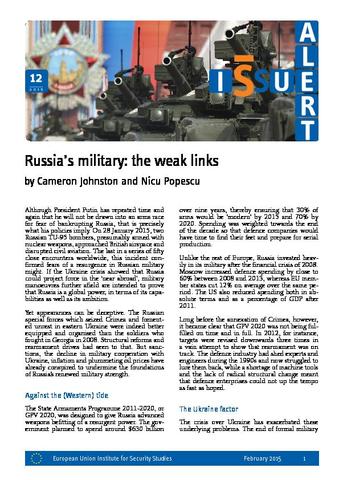 Although President Putin has repeated time and again that he will not be drawn into an arms race for fear of bankrupting Russia, that is precisely what his policies imply. On 28 January 2015, two Russian TU-95 bombers, presumably armed with nuclear weapons, approached British airspace and disrupted civil aviation. The last in a series of fifty close encounters worldwide, this incident confirmed fears of a resurgence in Russian military might. If the Ukraine crisis showed that Russia could project force in the ‘near abroad’, military manoeuvres further afield are intended to prove that Russia is a global power, in terms of its capabilities as well as its ambition. Yet appearances can be deceptive. The Russian special forces which seized Crimea and fomented unrest in eastern Ukraine were indeed better equipped and organised than the soldiers who fought in Georgia in 2008. Structural reforms and rearmament drives had seen to that. But sanctions, the decline in military cooperation with Ukraine, inflation and plummeting oil prices have already conspired to undermine the foundations of Russia’s renewed military strength.