A new PLA for a new era 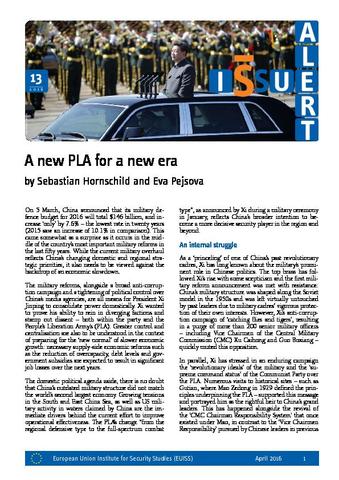 On 5 March, China announced that its military defence budget for 2016 will total $146 billion, and increase ‘only’ by 7.6% – the lowest rate in twenty years (2015 saw an increase of 10.1% in comparison). This came somewhat as a surprise as it occurs in the middle of the country’s most important military reforms in the last fifty years. While the current military overhaul reflects China’s changing domestic and regional strategic priorities, it also needs to be viewed against the backdrop of an economic slowdown. The military reforms, alongside a broad anti-corruption campaign and a tightening of political control over China’s media agencies, are all means for President Xi Jinping to consolidate power domestically. Xi wanted to prove his ability to rein in diverging factions and stamp out dissent – both within the party and the People’s Liberation Army’s (PLA). Greater control and centralisation are also to be understood in the context of preparing for the ‘new normal’ of slower economic growth: necessary supply-side economic reforms such as the reduction of overcapacity, debt levels and government subsidies are expected to result in significant job losses over the next years.