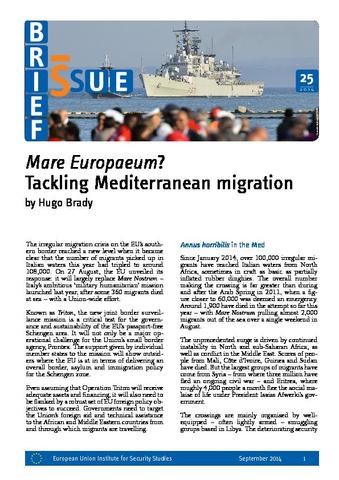 The irregular migration crisis on the EU’s southern border reached a new level when it became clear that the number of migrants picked up in Italian waters this year had tripled to around 108,000. On 27 August, the EU unveiled its response: it will largely replace Mare Nostrum – Italy’s ambitious ‘military humanitarian’ mission launched last year, after some 360 migrants died at sea – with a Union-wide effort. Known as Triton, the new joint border surveillance mission is a critical test for the governance and sustainability of the EU’s passport-free Schengen area. It will not only be a major operational challenge for the Union’s small border agency, Frontex. The support given by individual member states to the mission will show outsiders where the EU is at in terms of delivering an overall border, asylum and immigration policy for the Schengen zone. Even assuming that Operation Triton will receive adequate assets and financing, it will also need to be flanked by a robust set of EU foreign policy objectives to succeed. Governments need to target the Union’s foreign aid and technical assistance to the African and Middle Eastern countries from and through which migrants are travelling.

Schengen’s maritime border: another annus horribilis in the Med?