Schengen’s maritime border: another annus horribilis in the Med? 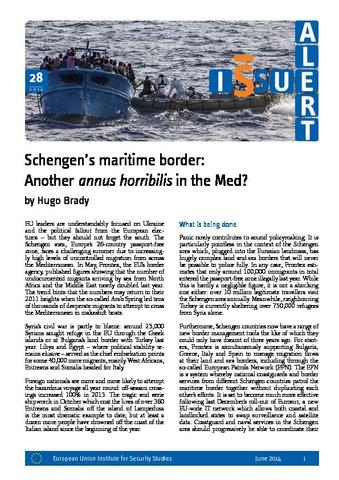 EU leaders are understandably focused on Ukraine and the political fallout from the European elections – but they should not forget the south. The Schengen area, Europe’s 26-country passport-free zone, faces a challenging summer due to increasingly high levels of uncontrolled migration from across the Mediterranean. In May, Frontex, the EU’s border agency, published figures showing that the number of undocumented migrants arriving by sea from North Africa and the Middle East nearly doubled last year. The trend hints that the numbers may return to their 2011 heights when the so-called Arab Spring led tens of thousands of desperate migrants to attempt to cross the Mediterranean in makeshift boats. Syria’s civil war is partly to blame: around 25,000 Syrians sought refuge in the EU through the Greek islands or at Bulgaria’s land border with Turkey last year. Libya and Egypt – where political stability remains elusive – served as the chief embarkation points for some 40,000 more migrants, mainly West Africans, Eritreans and Somalis headed for Italy.