How Serbian voters will make their choice on Sunday 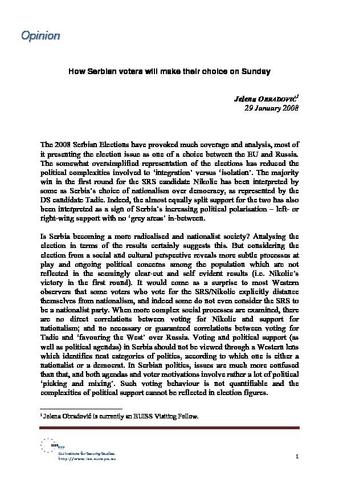 The 2008 Serbian Elections have provoked much coverage and analysis, most of it presenting the election issue as one of a choice between the EU and Russia. The somewhat oversimplified representation of the elections has reduced the political complexities involved to ‘integration’ versus ‘isolation’. The majority win in the first round for the SRS candidate Nikolic has been interpreted by some as Serbia’s choice of nationalism over democracy, as represented by the DS candidate Tadic. Indeed, the almost equally split support for the two has also been interpreted as a sign of Serbia’s increasing political polarisation – left- or right-wing support with no ‘grey areas’ in-between.

Is Serbia becoming a more radicalised and nationalist society? Analysing the election in terms of the results certainly suggests this. But considering the election from a social and cultural perspective reveals more subtle processes at play and ongoing political concerns among the population which are not reflected in the seemingly clear-cut and self evident results (i.e. Nikolic’s victory in the first round). It would come as a surprise to most Western observers that some voters who vote for the SRS/Nikolic explicitly distance themselves from nationalism, and indeed some do not even consider the SRS to be a nationalist party. When more complex social processes are examined, there are no direct correlations between voting for Nikolic and support for nationalism; and no necessary or guaranteed correlations between voting for Tadic and ‘favouring the West’ over Russia.