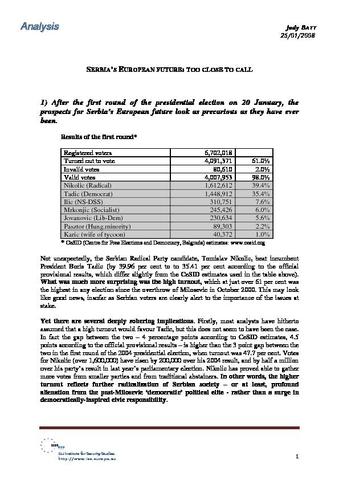 After the first round of the presidential election on 20 January, the prospects for Serbia’s European future look as precarious as they have ever been. Not unexpectedly, the Serbian Radical Party candidate, Tomislav Nikolic, beat incumbent President Boris Tadic (by 39.96 per cent to to 35.41 per cent according to the official provisional results, which differ slightly from the CeSID estimates used in the table above). What was much more surprising was the high turnout, which at just over 61 per cent was the highest in any election since the overthrow of Milosevic in October 2000. This may look like good news, insofar as Serbian voters are clearly alert to the importance of the issues at stake.
Yet there are several deeply sobering implications. Firstly, most analysts have hitherto assumed that a high turnout would favour Tadic, but this does not seem to have been the case. In fact the gap between the two – 4 percentage points according to CeSID estimates, 4.5 points according to the official provisional results – is higher than the 3 point gap between the two in the first round of the 2004 presidential election, when turnout was 47.7 per cent. Votes for Nikolic (over 1,600,000) have risen by 200,000 over his 2004 result, and by half a million over his party’s result in last year’s parliamentary election. Nikolic has proved able to gather more votes from smaller parties and from traditional abstainers. In other words, the higher turnout reflects further radicalization of Serbian society – or at least, profound alienation from the post-Milosevic ‘democratic’ political elite - rather than a surge in democratically-inspired civic responsibility.