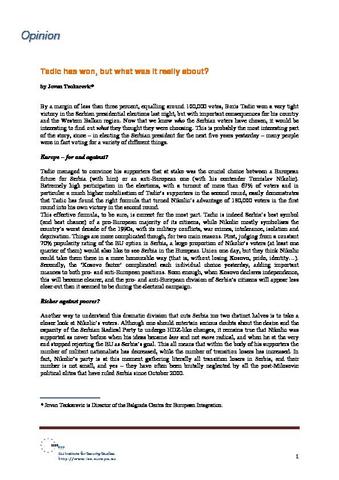 By a margin of less than three percent, equalling around 100,000 votes, Boris Tadic won a very tight victory in the Serbian presidential elections last night, but with important consequences for his country and the Western Balkan region. Now that we know who the Serbian voters have chosen, it would be interesting to find out what they thought they were choosing. This is probably the most interesting part of the story, since – in electing the Serbian president for the next five years yesterday – many people were in fact voting for a variety of different things.

Europe – for and against?

Tadic managed to convince his supporters that at stake was the crucial choice between a European future for Serbia (with him) or an anti-European one (with his contender Tomislav Nikolic). Extremely high participation in the elections, with a turnout of more than 67% of voters and in particular a much higher mobilisation of Tadic’s supporters in the second round, easily demonstrates that Tadic has found the right formula that turned Nikolic’s advantage of 180,000 voters in the first round into his own victory in the second round.

This effective formula, to be sure, is correct for the most part. Tadic is indeed Serbia’s best symbol (and best chance) of a pro-European majority of its citizens, while Nikolic mostly symbolises the country’s worst decade of the 1990s, with its military conflicts, war crimes, intolerance, isolation and deprivation. Things are more complicated though, for two main reasons. First, judging from a constant 70% popularity rating of the EU option in Serbia, a large proportion of Nikolic’s voters (at least one quarter of them) would also like to see Serbia in the European Union one day, but they think Nikolic could take them there in a more honourable way (that is, without losing Kosovo, pride, identity…). Secondly, the ‘Kosovo factor’ complicated each individual choice yesterday, adding important nuances to both pro- and anti-European positions. Soon enough, when Kosovo declares independence, this will become clearer, and the pro- and anti-European division of Serbia’s citizens will appear less clear-cut than it seemed to be during the electoral campaign.