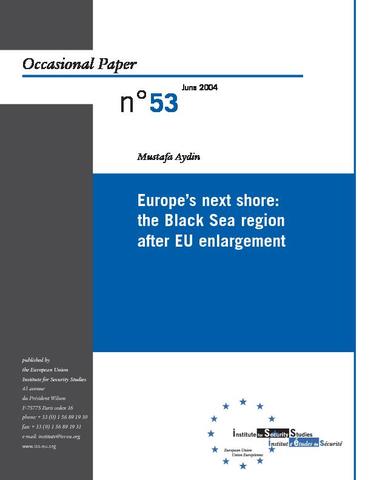 With its mosaic of problems, and their potential consequences, the wider Black Sea region is one of the more important challenges that the enlarged European Union will face. So far, the EU and the Black Sea region are linked together by a member state (Greece) and accession countries (Bulgaria, Romania and Turkey), as well as special relations with Ukraine and Russia. Once Bulgaria, Romania and Turkey become EU members, the Union will directly border the Black Sea, accounting for half of its coastline. The question now is not whether but rather when the EU will become a Black Sea power. As such, it will have to develop policies for regional issues and deal with threats to regional stability, because it will be virtually impossible to prevent various crises around the Black Sea from affecting EU Europe. Finding ways to prevent likely destabilising factors from arising at the regional level and dealing with them before they affect the EU area will be a trial for the enlarged Union.
Although the EU has so far consistently favoured individual country approaches in the region, this paper proposes that it should develop a regional approach towards the Black Sea and enhance its institutional linkages with regional organisations in order to ensure the smooth transformation of the troublesome states in the wider Black Sea region into viable and stable entities, and to facilitate their further integration into the emerging European architecture. This would allow the EU to deal with inherently regional problems within compact regional settings, consistent with the regional approach it has adopted in northern Europe, the Mediterranean, and South-Eastern Europe.
Creating a unique ‘Black Sea component’ within the EU, combining a number of member countries, negotiating and non-negotiating accession countries, partner countries and non-EU (with and without the intention to apply for membership) countries, would allow the EU to deal more efficiently with enlargement and post-enlargement problems in a vast region from South-Eastern Europe to the shores of the Caspian Sea. It would form a balanced grouping where none of the countries feels itself excluded from the benefits of further integration into the EU and where the EU itself would not need to decide its final borders once and for all. This would enable the EU to retain its most important trump card and to continue to push for further reforms and transformation in its ‘Black Sea neighbourhood’ without promising membership options.
Within the region, the Black Sea countries have, since the end of the Cold War, created a multitude of intergovernmental and non-governmental organisations and cooperation schemes. With the recent enlargement of the European Union, the region stands to benefit from the experience and stability of the latter. The EU is set to extend its borders to the last of Europe’s seas where it faces a new region that has diverse problems. The Black Sea Economic Cooperation (BSEC) organisation, bringing together 350 million people in an area covering 20 million square kilometres, is the most comprehensive and institutionalised structure within the region. Since its initiation in 1992, it has succeeded in creating an extensive cooperation scheme in one of the most conflict-prone regions of the post-Cold War world. Despite the number of ethnic- political conflicts the region has faced, the BSEC, with its wide-ranging interests and declared intention of cooperating closely with the EU, has been able to establish a permanent dialogue between its member countries and a spirit of cooperation towards mutual economic benefits.
The EU has so far resisted calls to develop a regional approach towards the Black Sea and actively participate to the Black Sea Economic Cooperation organisation. Now is the right time to reconsider the EU position within the ‘wider Europe-neighbourhood’ context, and to start fully integrating this problematic but energy-rich and strategic region firmly into the EU mould.

The Black Sea Region: challenges and opportunities for Europe