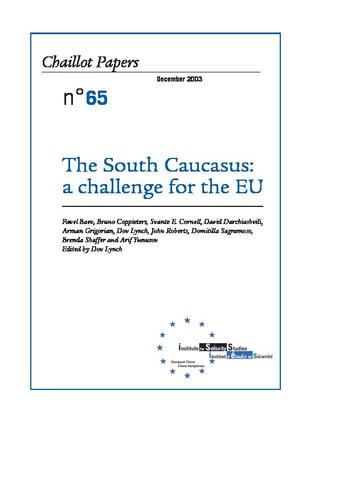 The South Caucasus contains three states that emerged after the collapse of the Soviet Union: Georgia, Armenia and Azerbaijan. Geographically, the region is populated by some fifteen million people, and links the Caspian Sea basin to the Black Sea on the east-to-west axis, and is the juncture between the greater Middle East, Turkey and Iran, and the Russian Federation. With the accession of Romania and Bulgaria to the EU in 2007, and eventually of Turkey, the South Caucasus is set to become part of wider Europe. In July 2003, the EU Council appointed a Special Representative with the task of developing a strategy to enhance stability and prosperity, and to advance conflict settlement across a strife-ridden region that is divided by war and blockade. The EU faces a series of conundrums in the South Caucasus: how to advance the European interest in the stability of a neighbouring region; how to avoid the EU becoming simply another ‘table’ – which would only reinforce the current forces of insecurity that are at play; and what can the EU do to alter the volatile status quo that has set over the region?