The Black Sea Region: challenges and opportunities for Europe 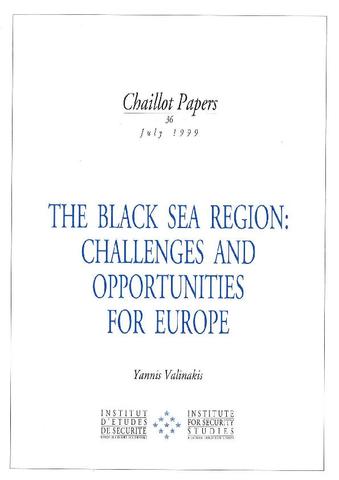 Following an approach adopted by WEU well before other European security organisations, the Institute has devoted part of its research to regions that do not yet include full member states of either the EU or NATO. After the entry into force of the Amsterdam Treaty, the CFSP will only have sense and credibility to the extent that it addresses the concerns of third countries, which will put the EU’s force of attraction as well as its conviction to the test. The Institute therefore considers it all the more essential to analyse subregional situations and their evolution, and the challenges and opportunities that the process of European integration could present for them. The diversity of conditions and political ambitions that characterizes the countries bordering the Black Sea is not an obstacle to their convergence towards a common approach, in the identification and promotion of their common economic, and consequently security, interests, that the new international situation has made possible.