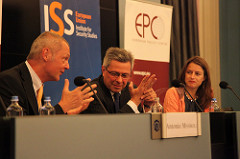 In June 2003, the EU-Western Balkans Summit resulted in the Thessaloniki Declaration, affirming unequivocally that ‘the future of the Balkans is within the European Union’.  Ten years later, and on the eve of Croatia’s accession to the EU, the EU Institute for Security Studies published a book entitled The European future of the Western Balkans: Thessaloniki@10 (2003-2013), assessing the progress made by the Western Balkans countries on the road to European integration over the past decade. While there have been many positives, the countries of the Western Balkans face diverse challenges, ranging from security issues, the consolidation of democracy and the rule of law to economic development and regional cooperation.

On Tuesday, 9 July 2013 in Brussels the EUISS organised a conference, in close collaboration with the European Policy Centre (EPC), to discuss the main messages concerning how far the countries of the Western Balkans have come and the challenges remaining, not just for the Western Balkans but also the EU. Antonio Missiroli, Director of the EUISS, kicked off the conference together with the authors. Rosa Balfour, EPC Senior Policy Analyst and Head of the Europe in the World Programme, and herself one of the authors, moderated the second session where Axel Walldén (European Commission), Maria Eleni Koppa (MEP) and Goran Svilanović (Regional Cooperation Council) took turns in looking at progress made since the Thessaloniki declaration and future challenges.

Finally, in one of his first public appearances following Croatia’s accession to the EU, H.E. Ambassador Drobnjak, Permanent Representative of Croatia to the EU and former Chairman of the Third Working Table of the Stability Pact for South Eastern Europe, honoured the conference by making the concluding remarks.