28 January 2013
By
With contributions from 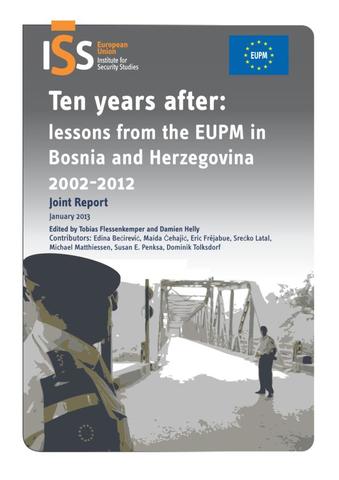 The European Union Police Mission in Bosnia and Herzegovina (EUPM) was the first-ever European Security and Defence Policy (ESDP) operation, conceptualised during 2002 and launched on 1 January 2003. However, at that moment, the EU was not a new actor in Bosnia and Herzegovina, neither politically nor operationally. The inability of the EU to manage the conflicts resulting from the dissolution of Yugosla­via which erupted in 1991 and 1992 provided the impetus for the development of EU crisis management structures throughout the 1990s. EUPM was to become the first operation to test and put those structures to use. Also throughout the 1990s the EU deployed EU crisis management tools avant la lettre in Bosnia and Herzegovina. Since 1991, the European Community (later: Union) Monitoring Mission (ECMM/EUMM) had been active in the country, and later, following the Washington Agree­ment in 1994, the EU deployed a mission to the city of Mostar to promote the reinte­gration of the divided Herzegovinian capital. The operational experimentation took place in parallel to the development of political instruments under the CFSP. Be­fore the formal establishment of the function of EU Special Representatives (EUSR), the EU member states appointed Lord Carrington (1991), Lord Owen (1992) and then later Carl Bildt (1995) as EU Representatives for the Former Yugoslavia and Co-Chairmen of the International Conference on Yugoslavia. The inception of and decision on EUPM took place in parallel with the appointment of the first formal EUSR for Bosnia and Herzegovina (BiH) on 11 March 2002. These decisions marked the starting point of a new era in the bilateral relations between Bosnia and Herzegovina and the European Union, whereby BiH continued to remain the testing ground for EU foreign policy instruments. EUPM became the ‘guinea pig’ and trail blazer for the development of ESDP and for the Union and its for­eign policy bodies a laboratory to experiment with ‘learning by doing’. EUPM existed throughout an exceptionally formative decade for the EU. The mission’s relevance was boosted in 2003 by the confirmation of a EU member­ship perspective for Bosnia and Herzegovina and the other Western Balkans coun­tries. The EUPM witnessed two waves of EU enlargement and the consequent re-assessment and controversies regarding the sustainability of reforms in the areas of the rule of law, particularly in the southeastern EU member states (Bulgaria, Greece, Hungary and Romania). Operationally and politically it was affected by the constitu­tional debate of the 2000s and the continuous build-up of crisis management struc­tures and the growth of CSDP. The mission drew to a close at the end of this cycle at a moment of renewed uncertainty about the future of the European project. All of these developments played out in the small theatre of Bosnia and Herzegovina where the mission oversaw the development of police and the rule of law in the country and the wider region and witnessed the emergence of the EU area of justice, liberty and security.