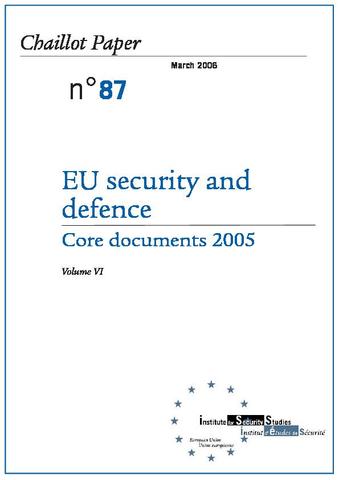 A year of striking contrasts, 2005 will go down in the annals as a year in which the European Union experienced a major political crisis, while at the same time showing remarkable dynamism on the international stage.
This volume contains as comprehensive a compendium as possible of the initiatives undertaken by the European Union in the field of security and defence in 2005. In the field of ESDP, no fewer than six new operations were launched, notably in South East Asia (the ceasefire monitoring mission in Aceh) and in the Middle East (the advisory mission to the Palestinian police and the border assistance mission at the Rafah crossing point). A new instrument was added to the ESDP toolbox: the European Defence College. The rationalisation of the arms market led the European Defence Agency to publish a code of conduct on defence procurement of the EU Member States. The civil dimension of crisis management underwent a crucial new development with the setting up of a European Gendarmerie Force. On the political front, the highlights of 2005 were the beginnings, at long last, of European-American reconciliation in the aftermath of the Iraq crisis, progress with regard to extending enlargement to Croatia and Turkey, (successful) mediation in Ukraine and (more problematic) mediation over the Iranian nuclear issue.