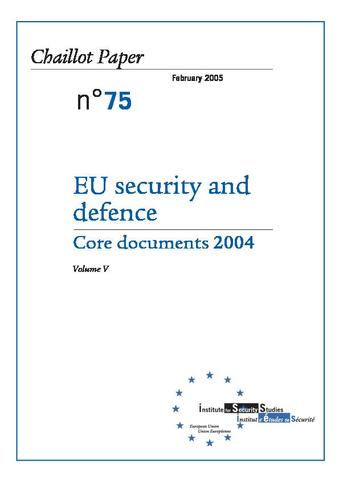 This fifth volume of Core Documents lists the European Union’s decisions and actions in the field of security and defence taken during 2004.
Texts concerning ESDP are collected in the first part of this volume: they include in particular the establishment of the European Defence Agency, the decisions on battle groups and the European gendarmerie, the launch of the EUJUST operations in Georgia and Althea in Bosnia and Herzegovina, the 2010 Headline Goal and the substantial development of the civilian aspect of crisis management. However, the first part also deals at length with the fight against terrorism, the Union’s relations with Iran, the Middle East, Iraq and Africa, and the various Commission initiatives relating to financing of research and restructuring of the arms market.
The second part of this work is devoted solely to the Constitutional Treaty; it includes all of the sections relevant to defence, but also to foreign and security policy in the broader sense. As for the title of the work itself, it reflects the joint decision to hold all future European Council meetings in Brussels; the capitals of the countries holding the presidency are therefore no longer mentioned on the cover of this collection.
In the young history of this strategic Europe, 2004 marks the end of a cycle: that of the first five founding years of security and defence policy. The institutional foundations of the ESDP were laid by the European Council in Cologne in 1999. In December 2004, the takeover by the Union of NATO’s operation in Bosnia and Herzegovina crowned an impressive series of efforts, compromises and demonstrations of political commitment on the part of the 25 member states to strengthen, through the ESDP, the overall consistency of the Union’s action outside its borders.