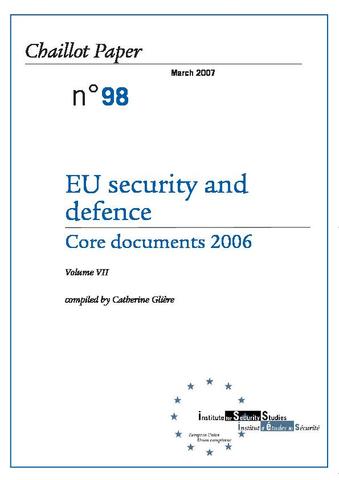 2006, another year in which ESDP has gone from strength to strength. Unfortunately, it is true that its dynamism is also a symptom of the continuing deterioration in the international security situation since 2003. The civil war in Iraq, the nuclear issue in Iran, the war in Lebanon, the resurgence of the Taliban in Afghanistan, the Israeli-Palestinian deadlock, the energy, Darfur, the disintegration of Somalia, tensions between Georgia and Russia: all these events have increased instability in the EU’s neighborhood in 2006, both to the east and to the south. At the same time, ESDP’s rude good health also shows that the Member States, despite their major differences over the reform, purpose and budget of the European Union, now share a common vision of their strategic responsibility and of the overriding necessity for the Union to influence the political evolution of the world. This Volume VII of the series of the Core Documents on European Defence offers a selection of the statements and of the decisions taken by the EU in 2006. Among them, the Operation EUFOR Congo and the deployment of European forces in Lebanon, the decisions and the preparatory missions set up regarding the police and rule of law mission in Afghanistan. With regard to the actual organisation of ESDP, the most memorable achievements in 2006 were the publication by the European Defence Agency of the Long-Term Vision report, the implementation of the Code of Conduct on weapons transfers, the finalisation of the EU Battlegroups, the reinforcement of civil capacities and especially the coordination between civilian and military crisis management instruments.