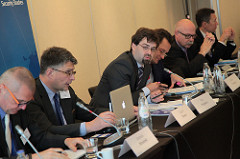 Recent events in Ukraine have brought the relationship between Russia and the West into uncharted waters, with consequences potentially affecting all channels of cooperation. Confronted with this fresh crisis at the EU’s doorstep, a nuanced and well-balanced policy discourse on its Eastern neighborhood and relationship with Moscow is needed now more than ever. The EU-Russia Forum, hosted by Carnegie Europe in partnership with the EUISS, convened civil society experts from across Europe, Russia, and the US for an exchange of views with EU officials on the current EU-Russian relationship and to look at possible scenarios to be drawn from it. Discussions aimed to form a better understanding of the current political and economic landscape in Russia, the potential impact of EU sanctions on both Russian and European economies, and short- and long-term scenarios for Europe’s Eastern neighborhood. The prospects for rebuilding the EU’s important relationship with Russia in a changed geopolitical landscape were also addressed.