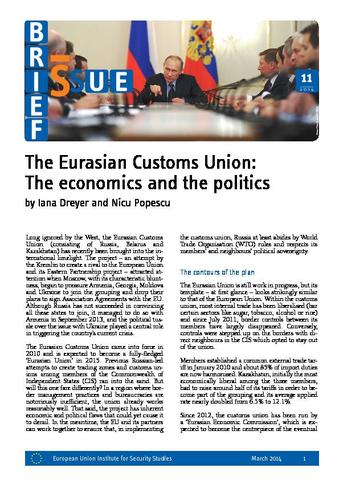 Long ignored by the West, the Eurasian Customs Union (consisting of Russia, Belarus and Kazakhstan) has recently been brought into the international limelight. The project – an attempt by the Kremlin to create a rival to the European Union and its Eastern Partnership project – attracted attention when Moscow, with its characteristic bluntness, began to pressure Armenia, Georgia, Moldova and Ukraine to join the grouping and drop their plans to sign Association Agreements with the EU.  The Eurasian Customs Union came into force in 2010 and is expected to become a fully-fledged ‘Eurasian Union’ in 2015. Previous Russian-led attempts to create trading zones and customs unions among members of the Commonwealth of Independent States (CIS) ran into the sand. But will this one fare differently? In a region where border management practices and bureaucracies are notoriously inefficient, the union already works reasonably well. That said, the project has inherent economic and political flaws that could yet cause it to derail.

The Moscow riots, Russian nationalism and the Eurasian Union