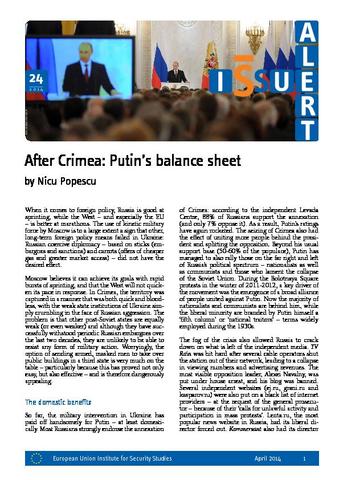 When it comes to foreign policy, Russia is good at sprinting, while the West – and especially the EU – is better at marathons. The use of kinetic military force by Moscow is to a large extent a sign that other, long-term foreign policy means failed in Ukraine: Russian coercive diplomacy – based on sticks (embargoes and sanctions) and carrots (offers of cheaper gas and greater market access) – did not have the desired effect. Moscow believes it can achieve its goals with rapid bursts of sprinting, and that the West will not quicken its pace in response. In Crimea, the territory was captured in a manner that was both quick and bloodless, with the weak state institutions of Ukraine simply crumbling in the face of Russian aggression. The problem is that other post-Soviet states are equally weak (or even weaker) and although they have successfully withstood periodic Russian embargoes over the last two decades, they are unlikely to be able to resist any form of military action. Worryingly, the option of sending armed, masked men to take over public buildings in a third state is very much on the table – particularly because this has proved not only easy, but also effective – and is therefore dangerously appealing.

Ukraine: the view from China