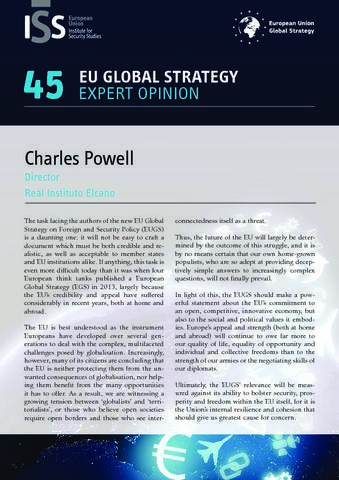 The task facing the authors of the new EU Global Strategy on Foreign and Security Policy (EUGS) is a daunting one: it will not be easy to craft a document which must be both credible and realistic, as well as acceptable to member states and EU institutions alike. If anything, this task is even more difficult today than it was when four European think tanks published a European Global Strategy (EGS) in 2013, largely because the EU’s credibility and appeal have suffered considerably in recent years, both at home and abroad.

The EU is best understood as the instrument Europeans have developed over several generations to deal with the complex, multifaceted challenges posed by globalisation. Increasingly, however, many of its citizens are concluding that the EU is neither protecting them from the unwanted consequences of globalisation, nor helping them benefit from the many opportunities it has to offer. As a result, we are witnessing a growing tension between ‘globalists’ and ‘territorialists’, or those who believe open societies require open borders and those who see interconnectedness itself as a threat.