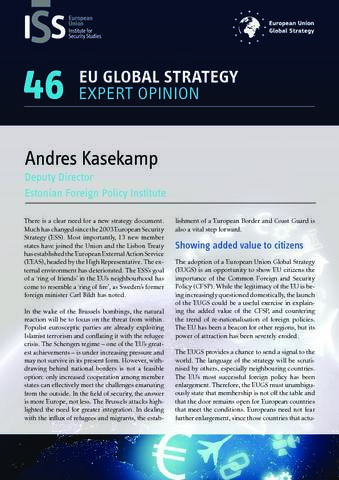 There is a clear need for a new strategy document. Much has changed since the 2003 European Security Strategy (ESS). Most importantly, 13 new member states have joined the Union and the Lisbon Treaty has established the European External Action Service (EEAS), headed by the High Representative. The external environment has deteriorated. The ESS’s goal of a ‘ring of friends’ in the EU’s neighbourhood has come to resemble a ‘ring of fire’, as Sweden’s former foreign minister Carl Bildt has noted.

In the wake of the Brussels bombings, the natural reaction will be to focus on the threat from within. Populist eurosceptic parties are already exploiting Islamist terrorism and conflating it with the refugee crisis. The Schengen regime – one of the EU’s greatest achievements – is under increasing pressure and may not survive in its present form. However, withdrawing behind national borders is not a feasible option: only increased cooperation among member states can effectively meet the challenges emanating from the outside. In the field of security, the answer is more Europe, not less. The Brussels attacks highlighted the need for greater integration.