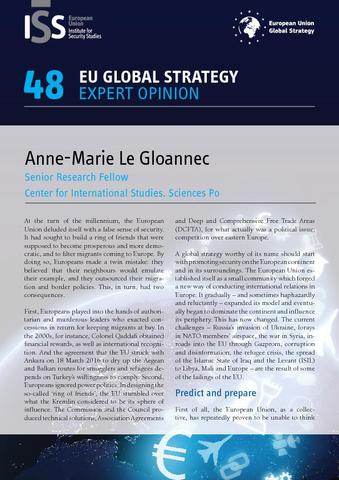 At the turn of the millennium, the European Union deluded itself with a false sense of security. It had sought to build a ring of friends that were supposed to become prosperous and more democratic, and to filter migrants coming to Europe. By doing so, Europeans made a twin mistake: they believed that their neighbours would emulate their example, and they outsourced their migration and border policies. This, in turn, had two consequences.

First, Europeans played into the hands of authoritarian and murderous leaders who exacted concessions in return for keeping migrants at bay. In the 2000s, for instance, Colonel Qaddafi obtained financial rewards, as well as international recognition. And the agreement that the EU struck with Ankara on 18 March 2016 to dry up the Aegean and Balkan routes for smugglers and refugees depends on Turkey’s willingness to comply. Second, Europeans ignored power politics. In designing the so-called ‘ring of friends’, the EU stumbled over what the Kremlin considered to be its sphere of influence. The Commission and the Council produced technical solutions, Association Agreements and Deep and Comprehensive Free Trade Areas (DCFTA), for what actually was a political issue: competition over eastern Europe.