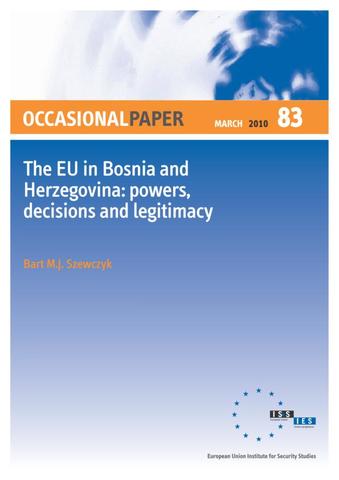 The Occasional Paper analyses the issue of the Bonn Powers in Bosnia – whereby the Office of the High Representative (OHR) can enact laws and remove elected officials – by comprehensively assessing the legitimacy of past OHR decisions. Adopting an established theory of legitimacy developed by Harold Lasswell and Myres McDougal, it argues that empirical legitimacy is best conceived as serving common interests of effective actors within an authorised process, and normatively prescribes that such process should be shaped to maximise values of human dignity. Given this theoretical framework, it examines the process authorised under the Dayton Agreement, which created the political structure that currently exists in Bosnia.  It discusses the origins of the Bonn Powers and surveys the various criticisms that have been levelled against them. It then develops an overall analysis of all OHR decisions to date and provides a critique of those categories of decisions that appear inconsistent with the Dayton order and its proclaimed organising principles. Moreover, it provides a focused assessment of a sample of the most problematic decisions, e.g. the removal of elected officials, to show how their empirical legitimacy can be analysed.  Finally, the paper concludes with policy recommendations, focusing on the issue of whether the Bonn Powers should be renounced or retained in the future in order to maximise values of human dignity. The paper finds that the use of the Bonn Powers is generally legitimate, in terms of the way legitimacy is defined in this paper, even though certain decisions and categories of decisions are susceptible to criticism.  Given the ongoing political problems in Bosnia, the paper recommends that the Bonn Powers be retained by the OHR or the EU Special Representative, but with restraints, such that they are used only to preserve the peace, promote the democratic process, and protect human rights – objectives justified under the Dayton Agreement.  In addition, the paper suggests specific improvements in the decision-making process to enhance the legitimacy of the Bonn Powers and prevent their misuse, such as establishing a formal hearing process to have all factual and legal arguments presented by all relevant parties before a decision is taken and to ensure that the decision can be subsequently reviewed in the light of these arguments in the court of public opinion.

Beyond international trusteeship: EU peacebuilding in Bosnia and Herzegovina