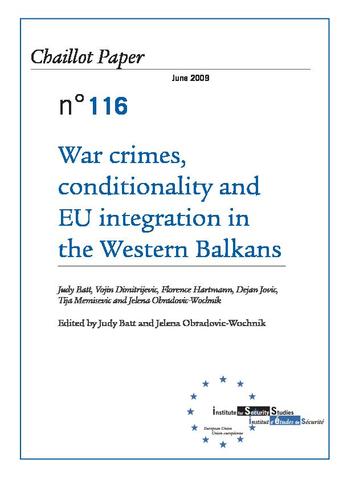 The baleful legacy of the wars of the 1990s continues to dog the states and societies of the former Yugoslavia and has overshadowed the disappointingly slow and hesitant trajectory of the region towards the EU. At the start of the new millennium, with the removal of key wartime leaders from the political scene in both Croatia and Serbia, it was widely hoped that the region would prove able to ‘leave the past behind’ and rapidly move on to the hopeful new agenda of EU integration. The EU’s Copenhagen criteria, which in 1993 first explicitly set out the basic political conditions expected of aspirant EU Member States, proved effective in the case of the new democracies of Central and Eastern Europe in supporting the entrenchment of democratic norms and practices, and stimulating reconciliation and good neighbourly relations among countries with turbulent histories. Building on this experience, the Stabilisation and Association Process, launched for the countries of the Western Balkans in 1999, included both full cooperation with the International Criminal Tribunal for the former Yugoslavia (ICTY) and regional reconciliation among the political conditions set for advancing these countries on the path to EU integration. EU political conditionality was intended to support the efforts of new political leaders to redefine national goals away from the nationalist enmities of the past and focus firmly on forging a path to a better future. This Chaillot Paper examines the extent to which this strategy has worked, especially in the light of the difficulties it has encountered in the face of strong resistance to cooperation among sections of the former Yugoslav population, many of whom have not yet fully acknowledged the crimes committed during the 1990s. Key chapters in the volume raise the vital questions of leadership and political will. EU political conditionality does not work unless the EU has a partner ready and willing to ‘play the game’, which presupposes that EU integration has become the overriding priority on the national political agenda.