Beyond international trusteeship: EU peacebuilding in Bosnia and Herzegovina 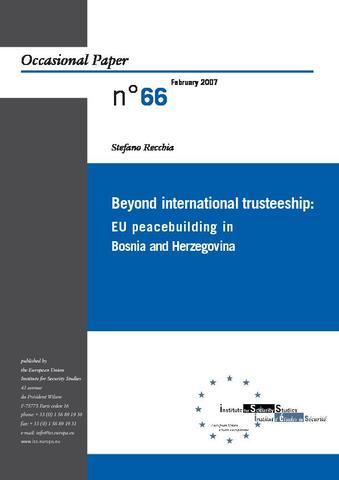 <br />The Dayton Peace Agreement on Bosnia successfully ended the war in late 1995. However, the price for peace was an extremely weak and dysfunctional postwar state that would probably not have survived without substantial international support over the following decade. This paper argues that things have begun to visibly change on the ground in Bosnia and Herzegovina (BiH) only with the emergence of the EU as the main international peacebuilding actor in more recent years, and notably since 2003. The EU’s increased peacebuilding role in BiH, carried out within the framework of the European Security Strategy, has allowed for critical progress towards making Bosnia’s common state institutions increasingly self-sustaining. There is no doubt that the potential does now exist to turn postwar Bosnia into a sustainable multi-ethnic democracy.
The central hypothesis developed in this paper is that since 2003 EU conditionality has increasingly become a viable alternative to international trusteeship in BiH. This is because conditionality has begun to be assertively communicated by the ‘double-hatted’ High Representative/European Union Special Representative (HR/EUSR) on the ground and is now clearly linked to the perspective of EU membership. There is evidence that difficult political, administrative and economic reforms have been recently adopted by BiH authorities in compliance with EU conditionality, crucially without straightforward international imposition. But this paper also argues that EU peacebuilders need to further improve their strategic effectiveness and political coordination on the ground, to support continuing reform in BiH once the Office of the High Representative (OHR) is closed down, possibly by late 2007.