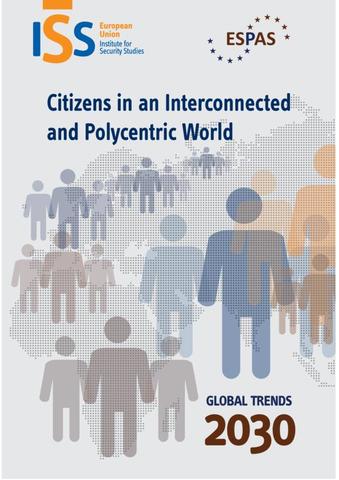 EU policy formulation depends on the timely identification of long-term global trends. Strategic thinking is essential both to drive EU domestic policies and to give coherence and consistency to the EU’s external action, bringing together common institutions and individual states. The EUISS, in its role as the European agency for strategic studies, was identified as the core institution of the pilot trend-monitoring European Strategy and Policy Analysis System (ESPAS). In leading the ESPAS project, the EUISS sought the close involvement of policy experts and regional representatives from around the world. The product of this pilot project was the ESPAS research report ‘Global Trends 2030 - Citizens in an Interconnected and Polycentric World’ which assesses the long-term political and economic environment facing the European Union over the next 20 years.  By 2030, the demands and concerns of citizens in many different countries of the world are likely to converge, with a major impact on national politics and international relations. This will be the result mainly of greater awareness among the world’s citizenry that their aspirations and grievances are shared. This awareness will create a global citizens’ agenda that emphasises fundamental freedoms, economic and social rights and, increasingly, environmental issues. The future of this agenda will depend greatly on national and global governmental decisions. However, in a world characterised by the diffusion of power, meeting the challenges of human development will depend increasingly on non-state actors, be they private companies, civil society non-governmental organisations (NGOs), or philanthropic organisations. Some extremist non-state actors are likely to present a threat to the well-being of human communities.

By 2030, the information revolution will likely cover the entire planet. This revolution will empower citizens, including a large and growing global middle class.  It can therefore be assumed that the citizens of 2030 will want a greater say in their future than previous generations. They are likely to be more aware of the threats they face together, and that they are part of a single human community in a highly interconnected world. But the emergence of a global public is also bound to generate increased expectations. This “gap” between what citizens want from their national governments and what these governments are able to deliver may become a source of friction, conflict and even revolt.