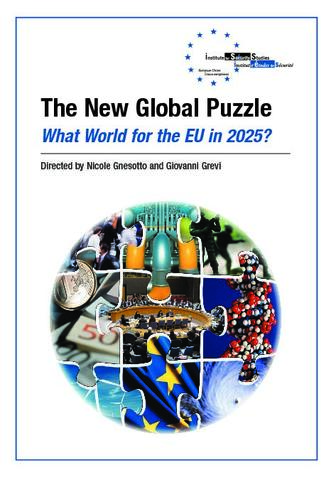 The EUISS has conducted a wide-ranging exercise to detect the long-term trends, factors and actors shaping the global environment of European integration - The New Global Puzzle. This Report illustrates the evolution of the key structural factors affecting change over the two decades to come - demography, the economy, energy, the environment, science and technology - and addresses some of the main questions concerning the future of the international system. The Report also includes seven regional outlooks exploring prospective developments of relevance to the European Union in Russia/Eurasia, the Middle East and North Africa, Sub-Saharan Africa, the United States, China, India and Latin America. Many critical junctures can be envisaged over the decades to come, from energy supply shocks to environmental catastrophes, from renewed confrontation between large state powers to a systemic breakdown of the Middle East. The development of the European Union into a fully-fledged global actor requires a shared assessment of the future challenges, threats and opportunities with which it will be confronted, and of the best options to drive, as opposed to endure, change. This Report argues that the biggest challenge confronting the EU will be to reconcile the emerging multipolar international system with a sustainable, effective multilateral order. The Report is intended as a first step in paving the way towards further reflection on the future position and role of the EU in the world. Both experts and the policy-making community, at the European and national levels, need to engage in this debate with a view to defining common, effective responses to tomorrow's challenges.