Drug trafficking in the MENA – The economics and the politics 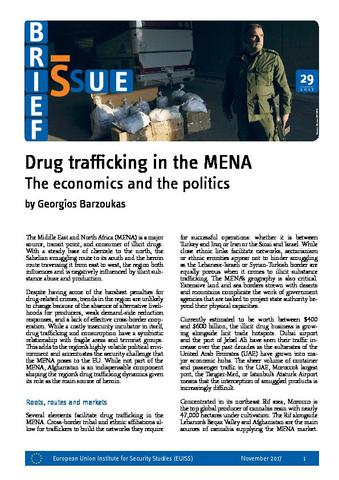 The Middle East and North Africa (MENA) is a major source, transit point, and consumer of illicit drugs. With a steady base of clientele to the north, the Sahelian smuggling route to its south and the heroin route traversing it from east to west, the region both influences and is negatively influenced by illicit substance abuse and production.

Despite having some of the harshest penalties for drug-related crimes, trends in the region are unlikely to change because of the absence of alternative livelihoods for producers, weak demand-side reduction responses, and a lack of effective cross-border cooperation. While a costly insecurity incubator in itself, drug trafficking and consumption have a symbiotic relationship with fragile areas and terrorist groups. This adds to the region’s highly volatile political environment and accentuates the security challenge that the MENA poses to the EU. While not part of the MENA, Afghanistan is an indispensable component shaping the region’s drug trafficking dynamics given its role as the main source of heroin.