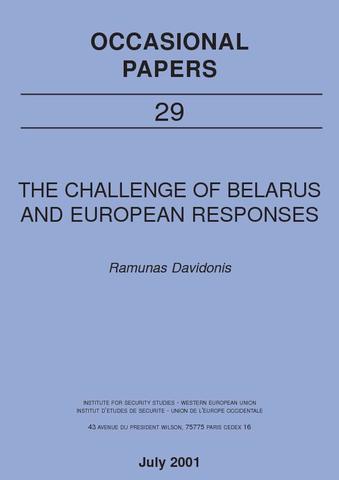 This paper deals with Belarus’s slide into authoritarianism, its foreign policy – especially its relations with Russia – and the European responses (or lack thereof).
The Republic of Belarus remains an exception and outsider among the states of Central and Eastern Europe. Whereas almost all the other states in the region have adopted Western orientations and market-driven reforms, Belarus has chosen to remain exclusively in the orbit of the Russian Federation.
The paper explores why Belarus fell into authoritarianism and provides a tentative analysis of its failed economic reforms and underdeveloped political system. As it becomes clear, it is the examination of Belarus’s national identity and civil society that provides the best explanation for the country’s choice to accept authoritarianism.
Presently Belarus articulates its security and foreign policy almost exclusively according to the interests of the Russian Federation. Such trend started developing even before Alexander Lukashenko became president. Under his rule, however, the country’s foreign policy has focused only on the East. The reasons are of both a domestic political and general economic nature, ranging from the country’s weak national identity to the legacy of the Soviet past, from trade and energy dependency on Russia to the feeble ties to the West. A detailed analysis of the Minsk-Moscow relationship shows, however, how intrinsically tense this is and how potentially contradictory mutual expectations are.
Taking into consideration Belarus’s direct border with NATO and (sooner rather than later) with the EU itself, the paper shows why Belarus poses a challenge to European security and what policies could be adopted to deal with it. Past and current responses by various European organisations and institutions are also examined. Europe is trying to find a solution through a policy of fostering an alternative elite in Belarus and strengthening civil society. At the same time, however, Europe presently has only modest leverage to influence developments in Belarus. More could perhaps be done indirectly, i.e. through Moscow, but so far the Russian leadership has refused to discuss matters related to Belarus with either the EU or other European and international organisations.
Presidential elections are expected to take place on 9 September 2001. They will represent an important test for both Belarussian and European policies.