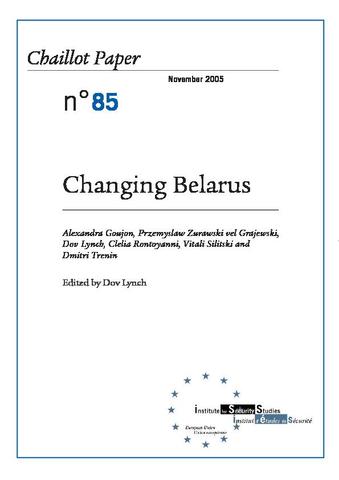 The existence of Belarus - Europe's 'last dictatorship' - on its borders poses a problem for the newly enlarged EU. The authoritarian regime in Belarus may be fearful of the changes that have recently occurred in its vicinity yet it continues to rule with confidence. The 'Orange Revolution' in Ukraine has become a model of inspiration to those both inside and outside Belarus seeking regime change. Yet the case of Belarus is different from Ukraine or Georgia before they experienced their revolutions. Although Belarus is now isolated on the fringe of Europe, its ties with Russia, increasingly wary of the influence of the EU and NATO in the post-Soviet space, remain strong. EU policy since 1997 has sought to put pressure on Belarus and induce positive change through the prospect of renewed ties. But this policy has not succeeded in fostering the growth of democracy in Belarus. In view of the events in Georgia and Ukraine, and also of its own new role as a foreign policy actor, the EU must consider the possibility of a crisis arising in Belarus either before or after the 2006 elections there and how it should prepare for such an eventuality. This Chaillot Paper, edited and introduced by Dov Lynch and featuring contributions from a variety of academics who are specialists on the topic, explores the various aspects of the problem that Belarus poses for the EU. The first three chapters review the state of affairs within the country, while the other chapters consider external factors including the relationship of Poland and Lithuania with Belarus. The final chapter examines EU policy towards Belarus in the light of recent changes in the political landscape, and seeks to outline a new approach that could catalyse change in Belarus.

Time for new thinking on Belarus