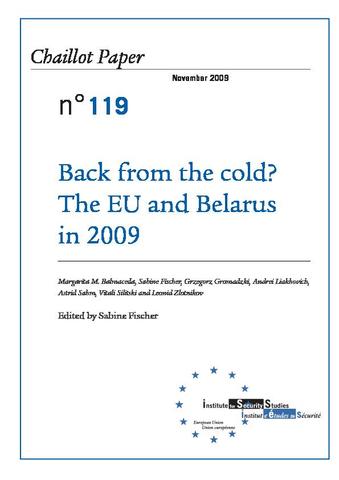 Are the EU and Belarus ‘back from the cold’? After years of freeze and the almost complete isolation of Belarus, the Russian-Georgian war in August 2008 has induced a thaw in relations between Brussels and Minsk. The Union temporarily suspended some of the sanctions in place against the Belarusian regime and moved on to partly integrate its problematic eastern neighbour into the Eastern Partnership in 2009. Nevertheless, relations with Belarus continue to be a headache for the European Union. The political regime in Minsk has managed to survive Western sanctions as well as a wave of colour revolutions in its neighbourhood in 2004 and 2005, and still commands a comparatively high degree of public support. Its ‘success’ was traditionally based on Russian political and economic support. This support, however, has been disappearing fast in the past few years, which is why the Belarusian regime is searching for new external partners – without, however, linking this to genuinely democratic and liberal reform projects on the domestic stage. In autumn 2009 the EU faces a decision between two main policy options in its relations towards Belarus: either it returns to coercive diplomacy or it continues on the path towards engagement and soft conditionality. This Chaillot Paper aims to provide in-depth empirical analysis on a country which, due to its long-standing isolation, remains a blank spot on the European map. It features contributions from a group of Belarusian and non-Belarusian authors who share their insights into the evolution of the political system and elite, economic development, civil society and the media, energy issues and foreign policy. Based on their research, this Chaillot Paper puts forward a number of recommendations for EU policy towards Belarus.