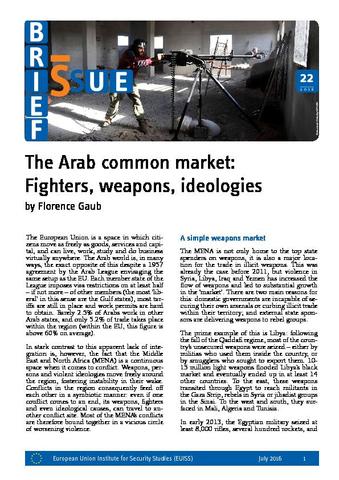 The European Union is a space in which citizens move as freely as goods, services and capital, and can live, work, study and do business virtually anywhere. The Arab world is, in many ways, the exact opposite of this despite a 1957 agreement by the Arab League envisaging the same setup as the EU. Each member state of the League imposes visa restrictions on at least half – if not more – of other members (the most ‘liberal’ in this sense are the Gulf states), most tariffs are still in place and work permits are hard to obtain. Barely 2.5% of Arabs work in other Arab states, and only 5.2% of trade takes place within the region (within the EU, this figure is above 60% on average). In stark contrast to this apparent lack of integration is, however, the fact that the Middle East and North Africa (MENA) is a continuous space when it comes to conflict. Weapons, persons and violent ideologies move freely around the region, fostering instability in their wake. Conflicts in the region consequently feed off each other in a symbiotic manner: even if one conflict comes to an end, its weapons, fighters and even ideological causes, can travel to another conflict site. Most of the MENA’s conflicts are therefore bound together in a vicious circle of worsening violence.